Politics are arguably the most annoying thing in existence (if one overlooks lukewarm coffee and knee-deep mud), yet they can make or break a novel.

As far as I’m concerned, there are two types of politics: personal opinions expressed by people in their everyday lives and all types of government.

Most books steer clear of government-driven politics, but they all take advantage of the other kind. After all, it’s emotion that ties us to stories. There is, however, a whole genre of books that wouldn’t exist without warped versions of government politics: dystopian. 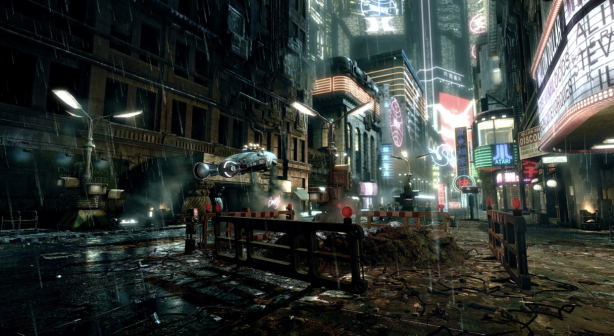 I realize Bladerunner is a sci-fi world, but it’s just so pretty!

If you’ve read some of my other posts, you may have noticed that I mention dystopian a lot. I find it irresistible to think about and analyze–there’s nothing better than a book that makes you think. Dystopian fiction brings up all sorts of fascinating topics, but politics is a very important aspect.

I wanted to do a break-down of several different dystopian novels and look at the governing styles.

The governing power in this novel is communism, in all its freaky equality. The people are split into five factions: Abnegation, Candor, Amity, Dauntless, and Erudite. When children turn sixteen they make the decision to stay in their current faction or become initiated into another. If they fail initiation they become part of the factionless (because every society needs its beggars). Each faction is responsible for a specific need of the community: selfless tasks, honest opinions (at least, I think that’s the point of Candor), food, protection and education, respectively. They do have an actual government that makes decisions, but a lot of Abnegation hold positions here and they are the very definition of reluctant power holders. As far as I can tell, there’s no money. It’s simply the position one holds that entitles them to benefits. Most things are free to whoever wants them. I’m purposely just talking about book 1 here because things get a little confusing for the rest of the trilogy.

Okay, this government is weird. At first glance it seems dictatorial–Big Brother is watching you–but then one gets the sense that everyone is essentially the government. It doesn’t matter what the actual person thinks, they just do their assigned job. If they get too outspoken, then they’re brainwashed (read, ‘tortured’) until they are infatuated with the way the government works. If they love it, they aren’t a problem; they’re another pair of eyes. And in a world where everyone is monitoring the actions of each other and keeping them in line, who is truly making the decisions? In 1984, this is never made clear.

The people are governed by a small council, so this may be a group dictatorship. But I’m not entirely sure that they’re ‘in the know’. The society is essentially communist with the words ‘us’, ‘our’ and ‘we’ replacing all uses of ‘me’, ‘I’, ‘my’, and ‘you’. No one is a separate entity with the privilege to make their own decisions or become attached to others.

The Hunger Games by Suzanne Collins:

This is essentially the only novel in this list where the characters and reader are 100% aware of the history of their politics. Panem’s President Snow has complete power, and he has the brains to wield it. The twelve districts each cater to a specific need for the community, but most of these resources go straight to the capitol. If one has the money, they can buy what they like, but the capitol makes sure that very few get the chance to amass any savings. People with nothing are a lot easier to bribe than those with everything.

A Clockwork Orange by Anthony Burgess:

This novel is an interesting enigma. The government is ‘in charge’, but they have little effect on the people’s mindsets. Crime is disgustingly common. The night is practically owned by people craving violence and abuse. The police are there to stop it, but no matter how many people they arrest, there are always more walking the streets. In a way, it’s a more hopeless image of our current society: we depend on the individual person’s goodness. If someone is a convict, we can not force them to conform, no matter how much they are punished. Punishment is futile unless the punished truly believes that what they did was wrong.

Yes, I’m now going to compare my own WIP–I couldn’t help myself! The city of Génial Guntiér is in the hands of the Controllér, but it’s not as simple as many dictatorships. The Controllér has sole power over the city, but he is surrounded by people who all want their own things. A character from my story states this very clearly:

“There are some things that you can’t change,” my tutor whispered. “You could, if you really tried to, but in order to do that you would have to start all over, and starting over is hard,” he took a deep breath. “A city isn’t about what it looks like, or even its rules. A city is about the people, so to change the city you have to change the people […] The Controller can make any rule he likes, but people only listen when they’re afraid, or when they’re happy. And so many people want their own rules to become reality… The Controller is just one man. What can he do against the whole city?”

From this angle, it all starts looking like life.