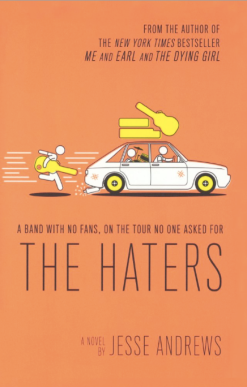 Sex jokes, cynicism, and risky formatting choices all crammed together in a chaotic masterpiece of a book? Yes, please.

Not many books can make me laugh out loud in public, but The Haters did so repeatedly.

I’m a big fan of Jesse Andrews, ever since I saw the film version of Me and Earl and The Dying Girl and immediately bought the book. A close friend of mine pre-ordered The Haters and kindly lent it to me as soon as he’d finished*. So my expectations were very high, considering how much I loved Jesse Andrew’s first novel.

The Haters surpassed those expectations and I’d go as far as to claim reading it was an amazing experience.

Wes and Corey are attending a jazz camp when they meet Ash, a fierce, no-nonsense girl with a guitar. They bond over the fact that all three of them are experienced haters. So together, they hate on the jazz camp and decide to leave and go on tour, struggling to find places to play their music and also make it not suck so bad. All the while, finding new and better ways to hate on their band, themselves, and everything else that can possibly be hated on.

What works: The bad male jokes, the pieced together formats, the bizarre descriptions–it works because it’s different. It stands out from any crowd of good but in comparison, plainer books. Who can ignore the confetti-throwing float in the parade? Just when you thought you were safe, BAM–have an entire scene of nothing but inner dialogue where ten+ versions of a very stoned Wes (one for each ‘problem’) argue amongst themselves. The closest book I’ve read that’s come close to this level of lunacy was Jesse Andrews’ first book Me and Earl and The Dying Girl (which you should read if you haven’t already), but even that was tame in comparison.

But when you strip The Haters down, it doesn’t fall apart as an actual story. Yes, it is a bit haphazard with some of the plot choices, but the key story elements are there. There is a character arc for all three characters and they come out, perhaps not closer to their goals, but having grown as individuals.

What I would change: This book isn’t for everyone. The characters’ humour is raunchy. It’s not a ‘flowing’ book, it’s a ‘you will be jerked along by your ankles and you will feel every bump’. It’s not conventionally pretty writing, and yes, the story structure is there if you look for it but it is incredibly subtle, especially the climax and the ending. It reads like a NaNoWriMo novel–all over the place and random. When I write, I take that NaNoWriMo novel of mine and I try to edit it into a cohesive whole. Jesse Andrews found the cohesion, but he left the absurdity, definitely splitting his readers down the middle into lovers and haters.

I realize my criticism isn’t so much criticism as stating this book’s acquired taste. And that’s true. I love this book and whilst I feel most writers would struggle to get something that appears to break what is thought of as a book, Jesse Andrews pulls it off. He’s written something completely crazy, but in an artful, careful way–creating a novel that is unique, raw, but also a good story.

If nothing else, just read it because it demonstrates how limitless the boundaries are for the stories we create.

*If you’re looking at the book’s release date, yes, that was a while ago. But I’ve mentioned Jesse Andrews in my posts before, and I really wanted to write a review of The Haters. He also has a new book called Munmun that came out in April this year. I’ve not read it yet, but I plan to!